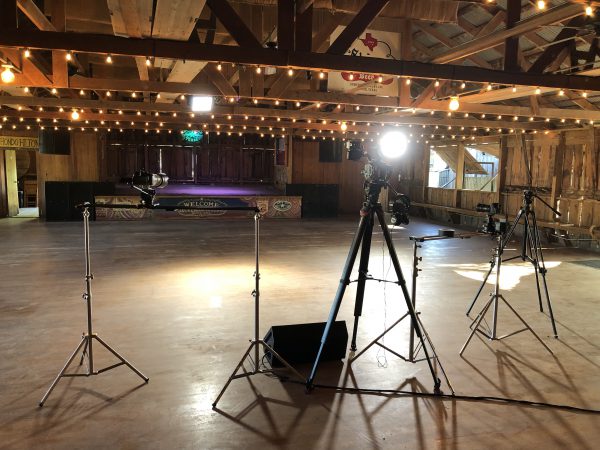 Our first shoot of this series was with Pat Green at Luckenbach dancehall. We spent most of the early morning shoot grabbing b-roll of the Luckenbach grounds, shooting some slider shots and drone footage. Once the doors were opened to us, we began our five camera setup. The lighting was perfect for Pat’s three person group, accented by two Astras that we set up in the wooden rafters.

Once Pat arrived, we jumped right into production. Being ready well ahead of the arrival of the musician has really helped us make the process seamless for them. They’re able to get in and out quickly, although we haven’t had any musician spend less than three hours with us. They have all been so accommodating to us and genuinely happy to be involved.

Pat Green got married at Luckenbach. "Crazy" was the only song of his that was played at his wedding. 19 years later he returned to the site of his wedding and recorded a beautiful acoustic version of that song. Pat does a great interview with Kit Patterson, co-owner of Luckenbach, as well. We are excited to share their stories from the interview down the road in an episode of The Dancehall Tapes. For now, enjoy this classic Pat Green tune.

Posted by The Dancehall Tapes: A Texas Music Preservation Project on Wednesday, May 22, 2019